A champion for change off the pitch, and a decorated champion on it, Hope Solo has dedicated her life to the game she loves and to making the world a better place for women everywhere.

Hope was born and raised in the small town of Richland, Wash., three hours southeast of Seattle. After Hope led her team to a state title at the high school level and twice earned Parade All-American honors, nearly every top program in the country came calling. But the Richland girl chose to stay close to home and attend the University of Washington. 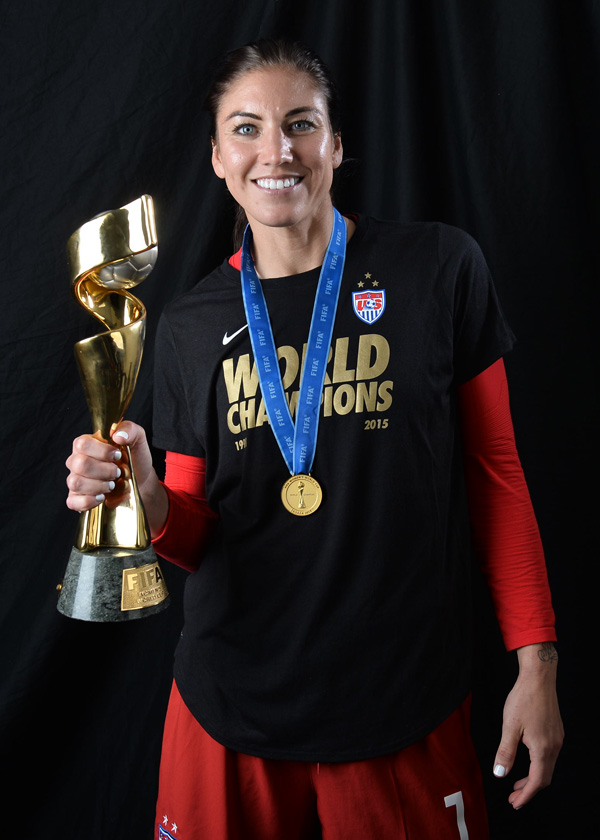 Hope after achieving one of her lifelong dreams: Winning the World Cup.

A dynamic forward for most of her youth, she headed to Washington to be a goalkeeper. Under the guidance of former United States Women’s National Team goalkeeper Amy Griffin, Hope blossomed into one of the best ever to tend the nets in the history of the sport. While resetting the UW record books from 1998-2002, Hope was named All-Pac-10 four times, All-American three times and became the first keeper ever to earn Pac-10 Player of the Year honors.

While Hope dominated at the collegiate level, the USWNT took notice. In late 1999, Hope was tabbed for her first full national team camp, and just a few months later, she earned her first cap in an 8-0 shutout win against Iceland. That start was indicative of the success No. 1 would have in a USWNT kit.

Her first taste as the starting U.S. keeper major international competition came during the 2007 FIFA World Cup. Hope started the first four matches for her country, allowing just two goals and posting three shutouts, and the American side went on to capture the bronze medal.

The summer of 2008 brought even more success as Hope started every game of the Summer Olympics, conceding just five goals along the way. The competition in Beijing culminated with a brilliant 1-0 shutout performance by No. 1 in the gold medal match against a dangerous Brazilian squad that totaled 11 goals during the competition.

With the Olympic Gold on their resume, Hope and Co. entered the 2011 World Cup as the favorites, though the trip to Germany ended in heartbreak. After one of the most thrilling final matches in Women’s World Cup history ended in a 2-2 draw, the U.S. couldn’t hold off a determined Japanese squad, falling 3-1 in a championship shootout.

Hope and Co. entered the 2012 Summer Olympics looking for revenge, and they got just that, outscoring their opponents 16-6, including a 2-1 gold-medal game win over Japan to secure a second straight Olympic gold.

Hope Solo holds the single-season (26) and career record (153) for most goalkeeper wins. She has the most career shutouts (102), and the longest undefeated streak by a goalkeeper at 55 consecutive matches, spanning from 2002-2008. She has also made more appearances (202) and starts (192) than any other American goalkeeper ever.

In 2015, the American women returned to the FIFA World Cup in Canada determined to secure the most coveted trophy in their sport for the first time since 1999. Hope was brilliant in group play, allowing just one goal in three contests as the U.S. emerged as the top seed. Hope claimed her spot as the world’s best goalkeeper with three more shutouts in the knockout stage as the USWNT breezed into the World Cup final. There, they were met by a familiar foe in Japan—but they left no doubt in the championship rubber match. It took just 16 minutes for the U.S. to take an insurmountable 4-0 lead, which Hope held easily on the other end of the pitch as the USWNT prevailed 5-2 to become World Cup Champions.

Hope is a staple in the USWNT record books. She holds the single-season and career record for most goalkeeper wins at 26 and 153, respectively. She also boasts the most career shutouts at 102, as well as the longest undefeated streak by a goalkeeper at 55 consecutive matches, spanning from 2002-2008. No. 1 has also made more appearances and starts than any other keeper at 202 and 192, respectively.

After earning nearly every honor possible in her sport on the pitch, Hope looked to the world outside of soccer to continue to make her mark. Hope has assumed a prominent role in the fight for women’s rights and gender equality.